Pandey sets out to climb Sagarmatha for a cause « Image Khabar

Pandey, who is associated with the Nepal Scout, will start his mission from tomorrow (Wednesday).

“I will take up rights of children from top of Sagarmatha. I will also help contribute to Nepal’s tourism and will urge the Scouts from across the world to climb it,” he said at a press conference held in the Capital today.

The expedition costs Rs 4.5 million, and the money remained of the expenditures will be spent on the development of children, he said. He will be accompanied by a team of eight mountaineers.

A permanent resident of Ramechhap, he is planning to fly the flags of the World Scout, the National Youth Council (NYC) and the Lalitpur Scouts with the logo of its golden jubilee from atop Sagarmatha.

Likewise, he will also carry with him photos of four martyrs of Nepal and photo of Ramechhap.

Speaking at the event, Minister of Province 3 for Economic Affairs and Planning Kailash Dhungel praised Pandey on the expedition as country’s proud.

Other speakers NYC’s Vice President Madhab Dhungel and Chandan Kaushik, coordinator of the national ad-hoc committee of the Nepal Scout, gave best wishes on his mission. 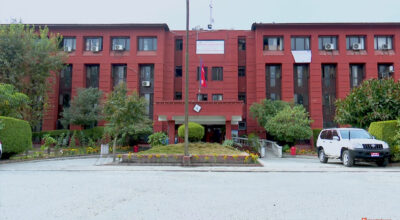