“We should be ready to give the leadership responsibility to the youth student community as it is technologically conscious and inquisitive class. The political revolution has been completed and now the youth should step forward for leading the economic revolution,” he said at a programme organised at his residence at Khumaltar, Lalitpur today to welcome the student leaders of the student organisation of the Rastriya Janata Party (RJP) to the Maoist Centre.

The Maoist chair said that the leftist alliance was ready to move ahead on the journey towards economic prosperity by addressing the demands of the Tarai-Madhes.

Stating that the demand of the Tarai-Madhes put forth in a peaceful manner could be met within the constitutional parametres, the former Prime Minister said, “What Madhes needs is development and prosperity and the government of the leftist alliance would emphasise on this.”

Maoist Centre leader Prabhu Saha said the existing disparity in the Madhes could be addressed through development and prosperity.

Student leader Sah said they joined the Maoist Centre as it was the only party that fights for the rights of the Madhesi people.

Along with Sah, former vice-president of the student wing of the Tarai Madhes Loktantrik Party, Ajit Pappu Yadav, secretary of the student wing of RJP Gyan Kumar Kuswaha, treasurer of Madhesi Student Society, Basanta Thakur, among others entered the Maoist Centre. Most of the new entrants are students from engineering background. 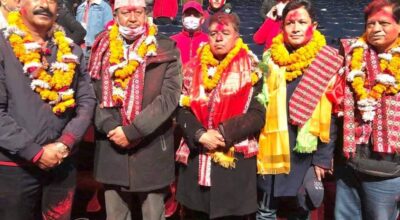