Addressing a joint press conference with his Indian counterpart held after the conclusion of the delegation-level bilateral talks between the two countries, he said social and economic development, and building a prosperous Nepal were the goal and objectives of the government under his leadership.

“Nepal has entered the era of economic development with the ending of the transition period; we need the support, cooperation and backing of neighbours in this situation,” the Prime Minister said.

Voicing Nepal’s desire to develop the Nepal-India relations based on mutual understanding as a model relation, he praised the role played by Prime Minister Modi to that end.

“Equality, justice, respect for each other and promotion of bilateral interest are the shared destiny of Nepal and India. The cooperative relations subsisting between the two countries would be further strengthened and deepened by means of peaceful coexistence,” PM Oli said.

He expressed the belief that the meetings and talks at the highest political level would take the bilateral relations to a new high and such talks would be significant in discussing on the various issues of the multi-faceted Nepal-India ties.

Making it clear that he has come on India visit to take the relations between the two countries to a new height and to explore opportunities of mutual benefit, Prime Minister Oli said he and Prime Minister Modi discussed the entire gamut of Nepal-India bilateral ties.

The PM stated that constructive talks were held on all issues including the Eminent Persons’ Group (EPG) formed at the highest diplomatic level of both countries to fine tune all aspects of the centuries-old Nepal-India relations befitting the 21st century.

Stating that the development and prosperity achieved by India in the last two decades is an opportunity for Nepal, he expressed the confidence that India would extend all possible support in his endeavours to making the Nepalis happy and contended.

Prime Minister Oli expressed hearty gratitude to Indian Prime Minister Modi for announcing to provide access to the sea for fulfilling his objective of including Nepal in the connectivity network through construction of physical infrastructure and the surface, sea and air routes.

Calling for India’s private and public sector investment in the production of power from the immense water resources available in Nepal which stands unutilised, he also stressed on providing impetus to the big projects like Upper Karnali, Arun-III, Pancheshwar, among other hydropower projects.

Prime Minister Modi started his statement in the Nepali language, saying his slogan of “Sabka Saath, Sabka Vikas” or “Development of All with the Support of All” and his Nepali counterpart’s slogan of “Sambriddha Nepal: Sukhi Nepali” or “Prosperous Nepal: Happy Nepalis”, were complementary.

“Happiness, peace and prosperity of the people are our shared goals and we are focused on this alone. We will fulfill people’s aspirations,” he said, adding that India would become a partner in Nepal’s inclusive development.

Portraying the elections to the local level, province and the federal parliament as the biggest achievement of Nepal, the Indian Prime Minister said that Nepal has entered a new era in its political history.
India cooperates in Nepal’s prioritized and needy sectors.

Prime Minister Narendra Modi has said that India was ready to support to the projects prioritized by government of Nepal. He added that the support will be focused on the priority and needy sectors of Nepal.

He further mentioned that Nepal, a country of Mt Everest will now have access up to sea and India will cooperate for the same.

PM Modi had concluded his remarks in Nepali language mentioning that India will continue its support in education, health, physical infrastructure, defense, security among other sectors of Nepal in future as well. 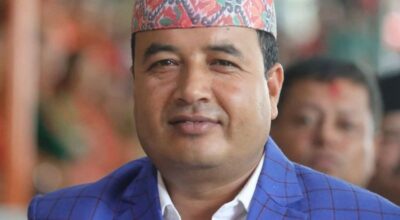