Ratnanagar, Chitwan, April 16 (RSS): The number of tourists visiting Sauraha to celebrate the New Year has more than doubled this time compared to the previous years.

This augurs well for the prospect of tourism in Chitwan district, according to the tourism entrepreneurs here.

“A significant number of tourists have arrived here for celebrating the New Year. The tourist arrivals are expected to go up in the coming days if this is any indication,” said Suman Ghimire, president of the Regional Hotel Association, Sauraha.

According to Ghimire this has raised hope the number of tourists will increase by 20 per cent in 2075 BS.

Some 10,000 tourists visited Sauraha last year and an estimated 6,000 of them stayed in hotels.

Hotels in Sauraha are filled with visitors who have arrived here in connection with celebrating the Nepali New Year 2075 BS.

Tourism entrepreneurs say that this time they had hard time providing accommodation to tourists and many tourists were seen exiting Sauraha for lack of accommodation.

“We had to even accommodate tourists by laying mats in hotel rooms,” shared Sheer Lal Pariyar, manager of Hotel Park Side at Sauraha. He said a large number of visitors had arrived in Sauraha three days before the New Year’s Day on April 14.

Sauraha is considered to be the third most popular tourism destination of the country after Solukhumbu, where Mt. Everest is located, and Pokhara.

In the past nearly 150 thousand visitors used to come to Sauraha. This year the target is to bring 180 thousand tourists. 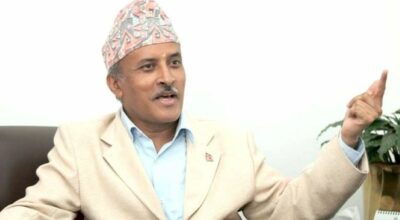