Gorkha, Aug 4: A new Early Warning System has been installed at Keraunja VDC of northern Gorkha which has been at high risk due to upstream and downstream landslides in human settlements.

The early warning system with siren has been set up to avert additional human and physical casualties as the recent landslide claimed three locals in the village, said Sanjaya Dhakal, a local of Keraunja Secondary School.

The siren-enabled system developed by scientist Rimal brothers (Ram and Laxman of Madanpur VDC of Nuwakot) has been put in place at the request of Mahabir Pun.

With the installation of the early warning system, the earthquake survivors languishing at 425 temporary shelters have no bound of happiness.

The system was installed after wider media coverage on Karaunja VDC battered by frequent landslides and floods. Around Rs 200,000 was spent for the setup of siren. RSS 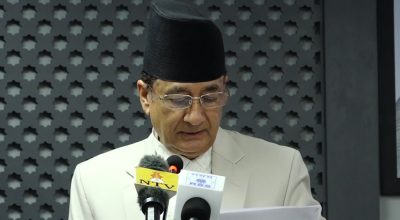